I'm currently playing through the Gears 2 single player campaign, and I don't know why exactly, but I'm not having very much fun. There are a few easy to identify points which I clearly don't like:
Except from the vehicle sequences (which are inexcusable) I can live with the other points. I like my bad story and cheesy dialogs, if there's a good game at the core.

But somehow, the core gameplay isn't very satisfying to me in Gears2. I've been playing into the COD4 single-player-campaign again for comparison, and holy shit this an entirely different level, even the "quiet moments" in COD4 are packed with action.

Gears2 brings up unbelievable stuff like mile-long worms, giant fish and whole cities sinking into the ground, but it doesn't grab me. Maybe it is because the scale is too big, or maybe it is because the actual fire fights aren't very exciting. I think maybe the main reason why the game leaves me cold is that there are too long pauses between fire fights, and fights are too predictable. Coming into an area with a lot of conveniently placed barricades? Sure as hell a few seconds later a door will shut behind you and Locust will start attacking.

Good thing Dead Space came along, otherwise I might have lost my faith in shooters ;)

I'm very impressed with the new Xbox dashboard, especially with the fast and painless update process (took maybe 2 minutes through my 16Mbit DSL line at home). I was prepared for the worst (something like 2 weeks without Xbox Live like last Christmas), but apart from a few glitches on the Marketplace which were fixed the next day everything went perfect. I love how responsive, fast and colorful everything is now, and the hard drive installation is a god-send because it turns off the jet-engine noise from the DVD drive.

I even like the Avatar stuff more then I should. I've been trying to create a Ron Jeremy avatar, but that's where the avatar creator really comes to its limits. Here's my wishlist for the next update:
Since I did 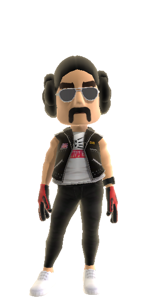 n't find the right hair and clothes, I went for a Ron Jeremy/Princess Leia hybrid: