Today I ported the OpenGL rendering code in Nebula3's bleeding edge branch back to Windows: 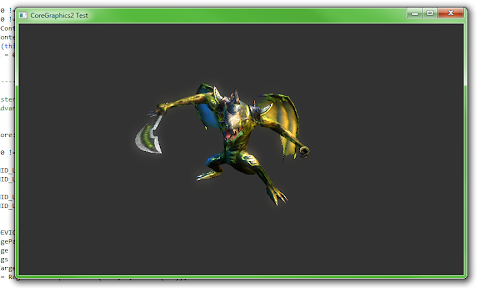 This is remarkable in 2 ways:

Why do I think that this is remarkable:

It is the end of an era! In 1997 I ported Urban Assault from DOS to Windows95 and Direct3D5. This was just around the time when Windows started its career as a gaming platform. D3D5 was the first D3D version which didn't completely suck because it had the new DrawPrimitive API, before that, rendering commands had to be issued through an incredibly arcane "execute buffer" concept (theoretically a good idea if GPUs would have been able to directly parse this buffer, but terrible to use in real-world code). The Urban Assault port to D3D was pretty inefficient since we ported from a software rasterizer (with perspective correction and all that cool shit), and if I remember correctly we issued every single triangle through a single DrawPrimitive call (although that wasn't such a big deal at the time). And the only graphics card which had somewhat acceptable D3D support was the RIVA128 from an underdog company called nVidia (this was before their breakthrough TNT2), and the top dog was the 3dfx Voodoo2 which had much better support for Glide then for D3D. But since UA was published by Microsoft we had to be D3D-exclusive of course.

Since 1998 Direct3D was our primary rendering API, I dabbled around with OpenGL from time to time, but nothing serious. We made the jump to D3D7, D3D8, and finally D3D9. Each new version sucked less and less, and D3D9 is still a really good API. We never made the jump to D3D10 because of Microsoft's exceptionally stupid decision to not back-port D3D10 to Windows XP from Vista, and since Nebula was never about high-end rendering features but instead running on a broad range of old hardware we could never justify to add D3D10 support, since we couldn't give up D3D9.

And as silly as it sounds, this boneheaded Microsoft decision from 7 years ago is one important reason why I'm ditching D3D today. World-wide, WindowsXP is the fastest growing Windows version. It's growing a lot faster than Windows8. Don't believe me? See the Unity hardware stats page for a scary reality check:

The Chinese Dragon has awoken, and it is running exclusively on XP. WindowsXP is also very popular in Eastern Europe and the Middle East. So if you want to support markets east and south of Middle Europe you're basically fucked if you don't support XP.

Another important reason is streamlining the code base. The currently "interesting platforms" (browser and mobile) are all running some variant of POSIX+OpenGL. In this new world the Windows APIs are the exotics, and Microsoft doesn't exactly help the cause by repeating their errors of the past (limiting Windows Store apps to D3D11). By using a single rendering code base (and especially shader code base!) across all platforms we're reducing our technical debt in the future.

I have a fallback plan of course, because there are a few risks:

The fallback plan has 2 stages:

OpenGL isn't perfect of course. It has some incredibly crufty corners, most of those have been fixed in through extensions and newer GL versions over time, but realistically we can't use anything newer then OpenGL ES2 with very few extensions for the renderer's base feature set.

When I removed the DirectX library stubs from the Nebula3 CMake files this afternoon I really had to stop and think for a moment. Who knows, maybe in a future blog post in about 15 years I will write "this was around the time when Windows became irrelevant as a gaming platform"? ;)