Alan Cox’ recent announcement of his Unix-like operating system for old home computers got me thinking: wouldn’t it be cool write programs for the KC85/3 in C, a language it never officially supported?

For youngsters and Westerners: the KC85 home computer line was built in the 80’s in Eastern Germany, the most popular version, the KC85/3 had a 1.75MHz Z80-compatible CPU, and 16kByte each of general RAM, video RAM and ROM (so 32kByte RAM and 16kByte ROM). The ROM was split in half, 8kByte BASIC, 8kByte OS. Display was 320x256 pixels, a block of 8x4 pixels could have 1-out-of-16 foreground and 1-out-of-8 background colors. No sprite support, no dedicated sound chip, and the video RAM layout was extra-funky and had very slow CPU access.

MAME/MESS has rudimentary support for the KC85 line (and many other computers built behind the Iron Curtain) and I dabbled with the KC85 emulation in JSMESS a while ago, as can be seen here: http://www.flohofwoe.net/history.html. So far this dabbling was all about running old games on old (emulated) machines.

But what about running new code on old machines? And not just Z80 assembler code, but ‘modern’ C99 code?

Good 8-bit C compilers are surprisingly easy to find, since the Z80 lived on well into the 2000s for embedded systems. I first started looking for a Z80 LLVM backend, but after some more googling I decided to go for SDCC, which looks like the ‘industry standard’ for 8-bit CPUs and is still actively developed.

On OSX, a recent SDCC can be installed with brew:

After I played a few minutes with the compiler I decided that starting right with C is a few steps too far.

First I had to get MESS running again. MESS is the son of MAME, focusing on vintage computer emulation instead of arcade machines. Since I last used it, MESS had been merged back into MAME, and development has been moved onto github: https://github.com/mamedev/mame

So first, git-clone and compile mess:

This produces a ‘mess64’ executable on OSX. Next KC85/3 and /4 system ROMs are needed, these can be found by googling for ‘kc85_3.zip MESS’ (for what it’s worth, I consider these ROMs abandonware). With the compiled mess and the ROMs, a KC85/3 session can now be started in MESS:

And here we go: 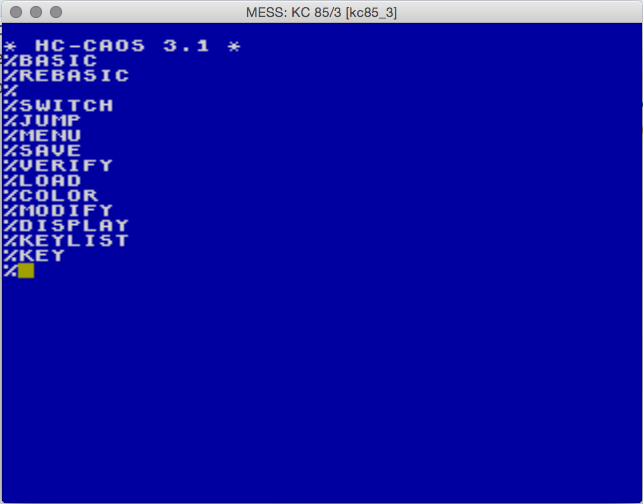 Getting stuff into MESS

Next we need to figure out how to get code onto the emulator. The KC85 operating system ‘CAOS’ (for **C**assete **A**ided **O**perating **S**ystem - yes even East-German engineers had a sense for humor) didn’t have an ‘executable format’ like ELF, instead raw chunks of code and data were loaded from cassette tapes into memory. There was however a standardised format of how the data was stored on tape. Divided into chunks of 128 bytes, with the first chunk being the header with information at which address to load the following data. This tape format has survived as the ‘KCC file format’, where the first 128-byte chunk looks like this (taken from the kc85.c MESS driver source code):

A .KCC file can be loaded into MESS using the -quik command line arg, e.g.:

So if we had a piece of KC85/3 compatible machine code, and put it into a file with a 128-byte KCC header in front, we should be able to load this into the emulator.

The canonical ‘Hello World’ program for the KC85/3 looks like this in Z80 machine code:

That’s a complete ‘Hello World’ in 27 bytes! Put these bytes somewhere in the KC85’s RAM, and after executing the command ‘MENU’ a new menu entry will show up named ‘HELLO’. To execute the program, type ‘HELLO’ and hit Enter: 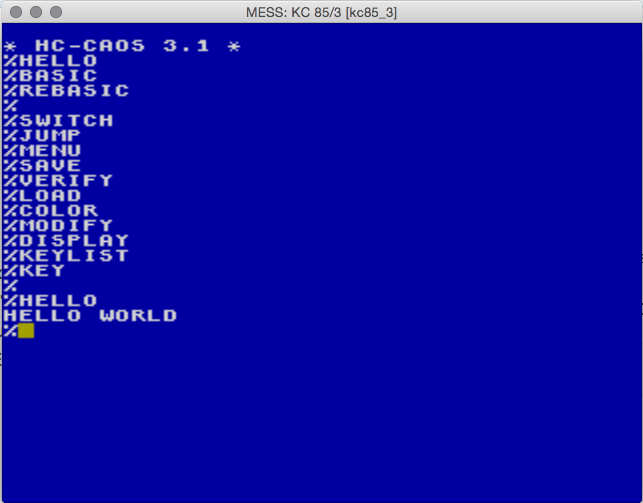 How does this magic work? At the start is a special ‘7F 7F’ header which identifies these 27 bytes as a command line program called ‘HELLO’:

The CD is the machine code of the Z80 subroutine-call instruction, followed by the call-target address 0xF003 (the Z80 is little-endian, like the x86), this is a call to a central operating system ‘jump vector’, the 0x23 identifies the operating system function, in this case the function is OSTR for ‘Output STRing’ (see page 43 of the system manual). This function outputs a string to the current cursor position. The string is not provided as a pointer, but directly embedded into the code after the call and terminated with a zero byte:

After the operating system function has executed, it will resume execution after the string’s 0-terminator byte.

The final C9 byte is the Z80 RETurn statement, which will give control back to the operating system.

This was the point where I started to write a bit of Python code which take a chunk of Z80 code, puts a KCC header in front and writes it to a .kcc file. And indeed the MESS loader accepted such a self-made ‘executable’ without problems.

Before tackling the C programming challenge I decided to start smaller, with Z80 assembly code. The SDCC compiler comes (among others) with a Z80 assembler, but I found this hard to use (for instance, it generates intermediate ASCII Intel HEX files instead of raw binary files).

After some more googling I found z80asm which looked solid and easy to use. Again this can be installed via brew:

The simple Hello World machine code blob from above looks like this in Z80 assembly mnemonics:

Much easier to read right? And even with comments! Running this file through z80asm yields a binary files with the exact same 27 bytes as the hand-crafted machine code version:

With some more Python plumbing I was then able to ‘cross-assemble’ new programs for the KC85 in a modern development environment. Very cool!

But the real challenge remains: compiling and running C code! Compiling a C source through SDCC generates a lot of output files, but none of them is the expected binary blob of executable code:

There’s 2 interesting files: hello.asm is a human-readable assembler source file, and hello.ihx is the final executable, but in Intel HEX format. The .ihx file can be converted into a raw binary blob using the makebin program also coming with SDCC.

But even with a very simple C program there’s already a few things off:
- global variables are placed at address 0x8000 (32kBytes into the address space), on the KC85/3 this is video memory so the default address for data wouldn’t work
- if any global variables are initialized, then the resulting binary file is also at least 32 kBytes big, and has a lot of empty space inside
- there’s a few dozen bytes of runtime initialization code which isn’t needed in the KC85 environment (at least as long as we don’t want to use the C runtime)

Thankfully SDCC allows to tweak all this and allows to compile (and link) pieces of C code into raw blobs of machine code without any ‘runtime overhead’, it doesn’t even need a main function to produce a valid executable.

Currently I’m placing global data at address 0x200, and code at address 0x300 (so there’s 256 bytes for global data), and I’m disabling anything C-runtime related. And of course we need to tell the compiler to generate Z80 code, these are the important command line options for sdcc:

With these compiler settings I’m getting the bare-bones Z80 code I want on the KC85. All that’s left now is some macros and system call wrapper functions to provide a KC-style runtime enviornment, and TADAA:

Here’s the github link to the ‘kc85sdk’ (work in progress):