TL;DR: some very early noob impressions after a few days of Rust from the perspective of a C, C++ and Python coder.

NOTE: I think I should make clear first that I’m very excited about Rust, even though some of the points in this post sound not that enthusiastic :) In the bigger picture, these are just minor nuisances, some are probably just my brain being tuned too much to C/C++, others will hopefully get fixed in time.

I finally decided to spend some time with Rust. In the past I’ve been reading a bit in the Rust Book, did a few tutorials, but never got further than midway through the Dining Philosophers sample. These coding tutorials don’t work for me to learn a language, it just doesn’t stick. I need to work on my own code, and if I’m stuck on a problem actively find a solution (mostly through googling and looking up the documentation, but still, somehow this works better for me than working through pre-baked tutorial code).

So here’s what I’m doing: a simple Z80 emulator in Rust, which may grow into a full 8-bit home computer emulator later.

What I’m looking for in Rust:

Sanity and a quiet retreat from the ‘Modern C++ Circus’, at least for some time.

For performance-sensitive game-development-related things, the ‘orthodox subset’ of C++ is as good as it gets, C++14 and 17 don’t improve the language in any of the areas I’m interested in.

Call me a traditionalist simpleton, but the following code makes much more sense (and is most likely much easier to debug):

What I’m looking for in Rust is a type-safe, memory-safe, slightly higher-level C without any hidden runtime magic for memory management.

I still want to be able to glimpse the assembly code between the lines, in the sense that I want to be able to estimate whether a line of high level code translates to 1, 10 or 100 assembly instructions, and what the memory access patterns roughly look like.

It may well be that the Rust world has (or will have) Functional Zealots in the same way that the C++ world has its Modern C++ Zealots, and that they will move the language into the ‘wrong direction’ (from my point of view), but for now I don’t care :)

To the Batmobile! Let’s go:

Ok, back to the topic at hand. What follows is an unordered list of things I stumbled over, found interesting, where I scratched my head or got stuck, all from a complete Rust noob, so take everything with a grain of salt.

Build System / Dependency Management (cargo): this is easily the best part of the whole Rust ecosystem, not because cargo is particularly awesome, but because it is the only option to choose from. There’s so much energy lost in the C++ world to decide between cmake, premake, WAF and whatnot (not to mention endless discussions and pointless arguing what’s the best or most standard build system) that not much energy is left to actually start writing any code. It’s bizarre.

Edit/Compile/Test: I’m using vim (or rather NeoVim) for my Rust experiments. For C/C++ I usually work in Xcode or VStudio (not because I think IDEs are particularly useful, but because the debugger is only one key-press away). For Rust I’ve installed 2 vim plugins: scrooloose/syntastic and rust-lang/rust.vim. Together they provide syntax highlighting and some loose syntax checking (like missing braces). I compile and test directly from vim with :!cargo build and :!cargo test. What I’m missing is a plugin which parses the compile errors and highlights them in vim (for C/C++, the plugin m21/errormarker.vim does this, not for Rust error messages unfortunately).

Debugging: with this I struggled a few days, but that’s mostly OSX 10.12’s fault. Rust creates DWARF debugging info for gdb and lldb, and while I feel more at home in a proper IDE debugger like Visual Studio’s I also don’t scoff at cgdb. But that’s where my tolerance ends, working in ‘raw’ gdb or lldb is definitely not a lot of fun. Doesn’t matter though since gdb doesn’t work in OSX 10.12 anyway, at least I didn’t get it to work after much frustrating dabbling. For some brain-dead security reasons gdb needs to be code-signed in OSX, and I spent a few hours trying to get this to work, but finally gave up. I suspect that Apple changed something code-signing-related in OSX 10.12 (again) since I’m pretty sure I had cgdb working before.

So the lldb debugger coming with the Xcode command line tools it is then. After a few more hours of googling around and trying things out I finally found a solution that works pretty well, even though it is only a very simple one: 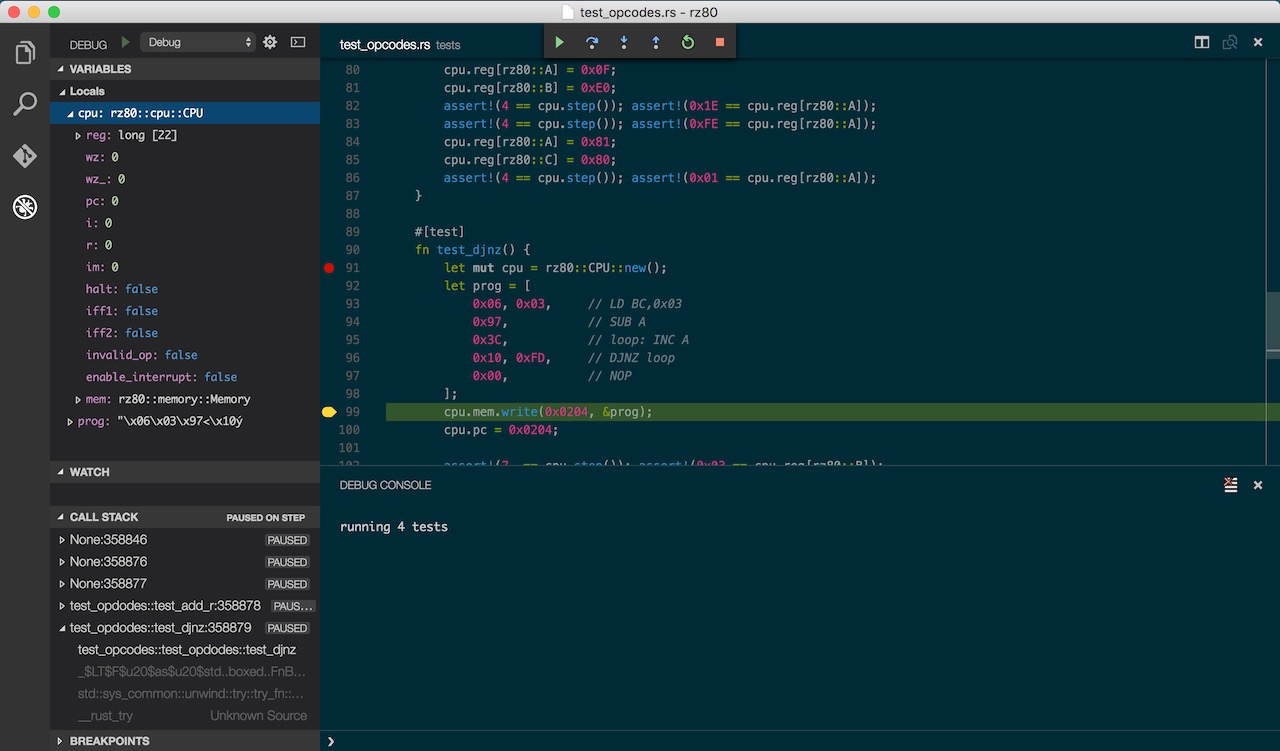 This allows to set breakpoints, step through the code and inspect local variables (that’s all I’ve tried so far). One feature I’ve been missing immediately is to show variables as hex (kinda important for a CPU emulator).

Noisy Type Casting: C doesn’t require explicit casting between integer types (e.g. uint8_t to uint16_t or unsigned to signed). I always thought that C would be a better language if it didn’t do automatic type casting, but after seeing this in action in Rust I’m not so sure anymore. Initially I used 8-bit and 16-bit unsigned integer types for the CPU registers, but this resulted in a manual type cast in nearly each line of code, and compared to the original C++ code this looked really noisy. I worked around this for now by using a wider, common integer type (currently i64) everywhere in the CPU structure. This avoids all the typecasting, but I need to handle overflow manually by adding a & 0xFF or & 0xFFFF in many places (and if I forget this in one place, I have a potentially hard to find bug in the emulation). Speaking of overflow:

Integer Overflow is a Runtime Error: I can understand why Rust does this but boy is it annoying in the context of an 8-bit CPU emulator, since this requires overflow on 8- and 16-bit types all the time. Rust has a special set of overflow-wrapping functions, you can write this for instance:

But at least to me this looks a lot messier than just:

I haven’t found anything similar in Rust, so I have to build BC ‘by hand’ by shifting and or-ing B and C together.

if is an Expression: ok, a nice thing for a change :)

In Rust you can write:

At first glance this looks worse than C’s ternary operator:

But in Rust it’s always the full-monty if-else, not some specialized language construct.

The last ‘dangling’ expression is the return value: This may look nice in some cases (for instance in the if-else above), but totally silly in others. For instance I have a method which implements the Z80 DJNZ instruction and returns the number of cycles taken:

That dangling 13 and 8 at the end of the if-else branches takes a lot of getting used to IMHO (you can write ‘return 13;’ but apparently that’s considered ‘un-rustic’).

…and in a separate integration test module (also in a standard location) I have a number of higher level tests which run the entire instruction decoding- and execution loop, for instance this little Z80 program to test the DJNZ instruction:

Nearly after each single line writing those tests, I do a :!cargo test from inside vim, and get the result in a fraction of a second: 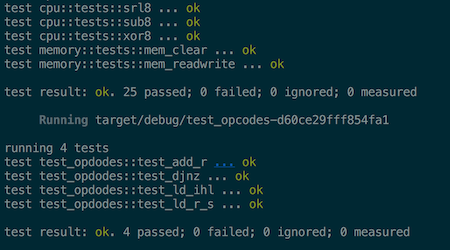 This builds the project against 3 Rust versions (stable, beta and nightly), runs the tests and produces the following output (click me).

A similar problem is detailed here (I had that one too): https://github.com/rust-lang/rust/issues/29975

Here’s the problem in a nutshell (including my possibly wrong interpretation):

A couple of methods to read and write emulator memory, and decrement a value:

In the actual instruction decoder method I want to implement the Z80 instruction DEC (HL), which loads a byte from memory at address HL, decrements it, and writes the result back to the address at HL.

I should be able to write this as a one-liner like this:

This first calls r8(), then dec8(), then w8() all sequentially one after the other. But Rust complains that it ‘cannot borrow *self as mutable more than once at a time’. May be I’m wrong, but I think that’s a false positive, the following code should be completely equivalent and is accepted:

Ok, enough for today. I hope to do a couple more blog posts like this as I progress with the emulator. One interesting problem I’ll need to solve is for instance: how do I get a Z80 program dump from a binary file converted into a Rust array inside a source file. In C/C++ I use python code generation for this, fully integrated into the build process. Not sure yet what’s the best way in Rust.