Next weekend I will merge the new SPIRV-based shader code generation back into the master branch. The work is happening in the ‘spirv-tooling’ branch and is tracked in Pull Request # 253.

Most of this was fairly un-exciting build-system-plumbing (just like most engine programming actually), but I think it’s laying a nice and solid foundation for future shader pipeline work (not sure yet what will come next though).

All the interesting stuff is actually happening in two Khronos tools/libs, I’m more-or-less just glueing those together:

There are a few minor issues remaining in SPIRV-Cross, but they can be worked-around and no code changes in Oryol will be required when those fixes land (more details at the end of this file).

The merge will break existing shader code and the C++ code that deals with uniform updates. Details on how to fix those problems can also be found at the end.

The pay off for those breaking changes is that shader code is now written in standard-GLSL (v330) instead of some cobbled-together GLSL/HLSL-bastard dialect with brittle text-macro-magic. Also, uniform updates on WebGL and GLES2 are now much more efficient for non-trivial shaders \o/

This is a quick recap how shader programming in Oryol looks and feels. From the outside this hasn’t actually changed that much.

Shaders in Oryol are program code, not asset files. This means that shader files live next to C/C++ sources in a project, and are ‘compiled’ and ‘linked’ into executables.

Shader source files are (now) written in standard GLSL, interspersed with (much fewer than before) ‘@-tags’ which identify vertex- and fragment-shaders, and define how those are linked into shader-programs. A very simple shader file might look like this (in the new syntax):

This defines one vertex- and one fragment-shader, and links them together into a shader program called ‘MyShader’.

This file is added to the build process with a CMakeLists.txt macro oryol_shader(), for instance:

The cmake macro oryol_shader() is a wrapper for the generic code-generation function fips_generate() (for more info on fips see here).

The shader source files are added to IDE projects (e.g. in Xcode or Visual Studio), along with the generated C++ header/source pair: 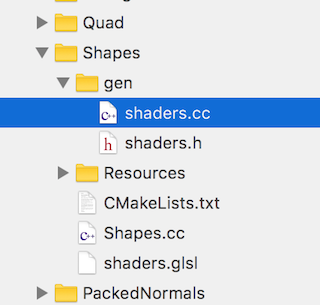 Shader source code is validated during compilation, and errors show up in the IDE like normal C++ compiler errors:

On the C++ side, shader uniform blocks are turned into C structures, with the same struct and member names as on the GLSL side:

The Shader.py code-generator script is the ‘big orchestrator’, it is invoked as custom build job by the build process, reads the shader source file, invokes a number of command line tools, parses their error messages, does a number of additional validations on their output and finally generates a C++ source/header pair which is then compiled as usual:

At the top in green is the hand-written shader source file in GLSL v330 format, this is first split into individual vertex- and fragment-shader files (also in GLSL v330).

These intermediate GLSL files are then compiled to SPIR-V bytecode via the glslangValidator tool, any syntax errors are caught here, mapped back to the original input file and printed in a format matching C++ compiler error messages (so that IDEs can understand them).

The resulting SPIR-V bytecode file is then fed into SPIRV-Cross (or rather my own command line wrapper tool around SPIRV-Cross as library).

The SPIRV-Cross step generates output files in the following shader language dialects (depending on the current build config):

If the build config uses Metal or D3D11 as rendering backend, the generated source files will be compiled right away into Metal or HLSL byte code by invoking the respective shader compilers, and the result will be written into a C-header as a hexdump.

In addition to the generated dialect shader files, the SPIRV-Cross wrapper tool also writes a JSON file with reflection information needed for the C++ side with detailed info about the vertex shader inputs, uniform blocks and textures used by the shader, this information is for instance used to generate C-structures matching the shader uniform blocks:

Finally the Shader.py python script takes over again and performs the final steps to generate the C++ source and header file which will then be compiled into the executable.

A nice side effect of the new shader pipeline is that uniform updates in GLES2 and WebGL are now much more efficient for uniform blocks with multiple members. Each GLSL uniform block is now converted to a single vec4-array in the output code (only for GLSL outputs), which can be updated with a single glUniform4fv() call instead of one glUniformXX() call per uniform block member. This is a good thing for WebGL which has a higher call-overhead than native GL implementations.

These are the current limitations and known issues:

Finally there’s currently a hack required in my own fork of SPIRV-Cross in the HLSL backend to correctly handle RowMajor vs ColMajor matrices, this is tracked here: SPIRV-Cross #170. Once this is resolved I will switch back from my own fork to the official upstream version.

In general all required code changes should be caught by compile errors, so finding and fixing them should be fairly straight-forward.

These are the required changes on the shader-side:

On the C++ side, the generated uniform block C-structs and the contained members don’t have a separate name, instead they are named exactly like their shader counterparts. To avoid naming collisions, the structs live inside a namespace named after @program tag in the shader source.

And that is pretty much all :)